No Facebook account is needed to view previously streamed videos. This link will take you to a previously recorded video. Look under Related Videos for more recent ones. Tip: Videos may start with sound muted so check the video first if you can't hear anything. 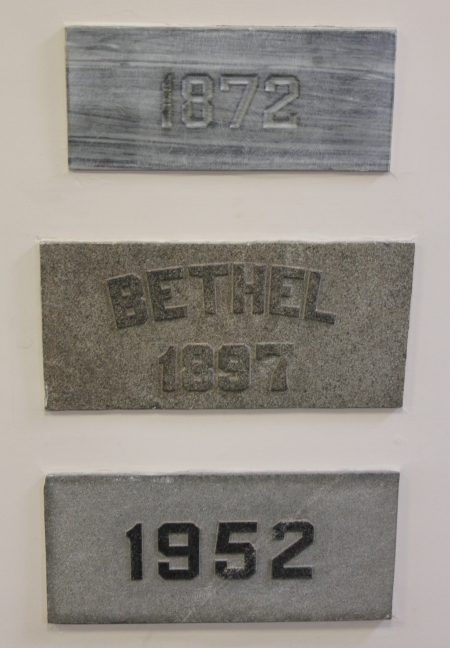 Bethel United Methodist Church began as St.Paul's Evangelical Association in 1883, in a building on Juniper Street. As the result of a split in 1891 the church lost its building and the worshipers met on the second floor of the former Hinkle and Biehn Shoe Store. In 1897 a church known as the Bethel United Evangelical Church was built on Branch Street -- now the portion of West Broad Street between the railroad tracks and Third Street. From 1922 until the merger with the United Brethren in Church the church was known as Bethel Evangelical. One year after the merger, early on Sunday morning, February 7, 1947, Bethel Evangelical United Brethren Church burned to its foundation. A few days later its pastor, the Reverend Donald McFall, died of a heart attack.

The pastor and people of Quakertown Methodist Church graciously offered the use of their West Broad Street sanctuary to the Bethel people on the Sunday following the fire. The Reverend N.B. Yerger (grandfather of Liz Cole), invited Bethel Church to use the Sunday School rooms of his church, Trinity Lutheran, for as long as needed.

An unused property on Eighth Street, formerly a religious publishing house, was purchased as a temporary house of worship in 1948. In 1952 that building became the Sunday School unit and an addition was built on to it to serve as a sanctuary.

By the time the two churches were yoked under one pastor in 1980, they had a history of cooperation. In 1970 and 1971 the two churches joined their youth groups. For a number of years combined Lenten services were held as well as a joint Vacation Bible School. A few years before the churches voted to unite, the Sunday Schools merged.

A Parish Study Committee recommended the merging of the churches to the congregations, who voted overwhelmingly to do so on May 6, 1984. His vision of a vital United Methodist presence in the community realized, Pastor Miller retired in 1985. Pastor W. Richard Kohler carried the dream forward and ground was broken on Freier Road on April 5, 1987. The church was dedicated on March 27, 1988.